What is my Volvo Bertone 780 worth?

How do you price a 25 year old hand built car that most people think is just an old 7 series Volvo?

By the time Volvo decided to discontinue the 780 in 1991, it was being discounted by dealers as much as $15,000 for a new 1991 model, just to clear them off the lot. The reason for the 780s lack of popularity (by some in the market) is a story for another article. But the 780 was largely ahead of its time as a luxury coupe on par with top BMW and Mercedes coupes of the day at a time when most Volvo customers were looking for more practical vehicles like the best selling 240 wagon. The weak engine, for a car of that price, was another common complaint.

Within 5 years, the average condition 780 had dropped to 10 to 15K and was sold as a “two door Volvo” with used car dealers often misunderstanding what they were selling. I lost out on buying one 780 back in 1995 when a mint condition 1990 model sold for $11,000 to a guy who wanted something for his new teen driver! My wife and I purchased our 1991 in 1995 from a used car dealer in North Carolina who was about to send the car to auction as it hadn’t sold after three months on the lot. He was selling it as a “two door 940.” We paid $13,000 with 84,000 miles on it in very reasonable condition. 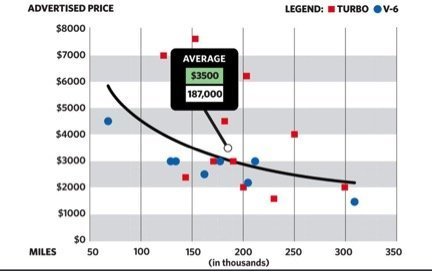 30 years later the remaining 780s generally fall into three categories. In the first category are the “well used and never understood” 780s. Most are in fairly rough condition. A CarFax report will show they have passed along through as many as five or ten owners, who generally treated it as any other 740 or 940 of the day. These cars can bring as little as $500 or as much as $3,000, depending on use and the type of engine. Those touting a “classic” with a worn 780 showing 200,000 miles should not expect high dollar, as is often the case with over zealous used car dealers online. Hopefully, these 780s will fall into the hands of those who can help restore them or use them to restore other 780s. Avoid at all cost sending a 780 to a junk yard for the price of scrap metal!

The second category are those who have passed through 2 or 3 owners, all of whom knew some of the unique history of the car and who have kept them in generally excellent condition, often as the weekend third car. These 780s do make their way to Ebay or Craigslist with some 100,000 to 150,000 miles, good maintenance records and the inevitable wear and tear (a few cracks in the dash and wood, split, or starting to split driver seats, etc.) These 780s are well worth $3,000 to $7,000, especially if the paint is in excellent condition and maintenance has been done consistently.

Beauty is in the eye of the beholder, but even most beholders will have some upper limits. A recent 1991 in excellent condition topped out at $8,500 on Ebay. For those who know the unique history of this car and want to drive one of the most comfortable and well-equipped touring coupes of the late 1980s, a 780 is the right car for you.

Join the conversation on the 780coupe.com discussion board to share values you are seeing, especially in the international markets.  Let us know what you are seeing.

Got a 780 to sell? Post it on the 780coupe.com classifieds for free. Feel free to email us for any advice and to help get the word out to our network. And let us know when you see 780s for sale as we would be glad to help the owner and add their car to the registry as well.