Bertone has two separate properties in Turin. Bertone Carrozzeria SpA , the production wing of the firm where the factory is located and Bertone Stile SpA, the design house. For Bertone to actually produce a 780, with such high quality standards, significant additions had to be made to their existing Carrozzeria factory in Grugliasio. Some 200,000 square feet were added to the existing 750,000 square foot factory. New buildings, dedicated exclusively to the 780s production, were built. A 1986 Autocar article would later describe the new factory as, “lacking all of the touches that make the Italian car factory the Italian car factory. Here, for instance, you don’t see workers playing cards in their lunch break, and there aren’t any rally car posters around. It’s a clean, efficient and dull place, enlivened only by Bertone workers pedaling yellow painted bicycles around.”
Mario Panizza, the former project manager for Bertone, who joined the team in 1984, has become a good friend and supporter of this research. After a morning of interviews, he drove me out to the old 780 factory, in Grugliasco, outside of Turin. Maserati purchased the building from Bertone back in 2009 but little, other than the front sign had changed. And the street that runs beside the factory now bears the name “Nuccio Bertone Avenue.”
Mario pointed to his former office window and to the adjacent building that he described as the “experimental shop,” effectively an in house research and design department that created the many one off parts for the 780. He explained, “All prototype vehicles were assembled in this shop. Trim components were often manufactured there before a design was agreed upon and an outside supplier was contracted from production.”

Paolo Caccamo commented in the Autocar interview, “We receive a kit of parts from Sweden for the 780: we get most of the floor-pan – about 80%- along with the suspension, engine, gearbox, heater, air conditioning. Everything else has been designed by us.” Bertone would often re-engineer parts in their experimental shop.

A separate body shop, paint shop and then assembly shop were architected and then built to ensure Volvo standards would be met. Most interesting was a tunnel that came out from the assembly building and into a parking lot across the street. That tunnel is where the final 780s were moved on an automatic conveyer to the lot, where they were prepared for shipment. As we drove under the tunnel, I could recognize the faint outline of the Bertone emblem where it had been removed by Maserati a few years before.
At peak production, a 780 would take 49 hours to build from body shop to final assembly. Initial projections had been that up to thirty 780s could be produced in a day, but the reality of hand building a car meant that number was no more than twelve per day. Most of the time was spent in final assembly and inspection, having moved more quickly through the body and paint shops.

Workers began promptly at 7:30a.m. and were on one shift until 4:30p.m., with an hour for lunch. They had a ten minute break in the morning and ten minutes in the afternoon. The line would never stop, so someone would step in for a worker who was on break. The factory ran five days a week.

Mauro Charriere arrived at our Turin interview with a box of files, commemorative items and even an unopened Bertone uniform. He pulled out his laptop with various electronic presentations and then he reached in the box and proceeded to tear open the original sealed Bertone shirt, put on the armband and baseball styled cap and posed proudly. Smiling, he seemed to embody the type of attitude the workers had while assembling a 780.

Coachbuilding is a dying art. The old world craftsmen, who designed, molded in clay, hammered out metal body panels and assembled a car by hand have gone the way of the clockmaker and blacksmiths. But at Bertone, in the 1980s, the art of producing a handmade automobile was still known and practiced. For instance, the wood trim on the 780 was completely unique to the individual car. No sets were ever exactly alike, as each of the 780s’ six individual pieces, dash and doors, had to be produced, matched and then kept together as the entire car was assembled, not always easy to track. (If one looks behind any of the wooden trim pieces they are all uniquely hand numbered and matched to the other wood trim in the car.) Volvo knew they had the right partner and the best facility, but they needed to be sure the Bertone team understood what it would take to build a world class car with the Volvo marque, and that took many hours of meetings. We are looking for more images of the factory? Got anything to contribute?  info@780coupe.com 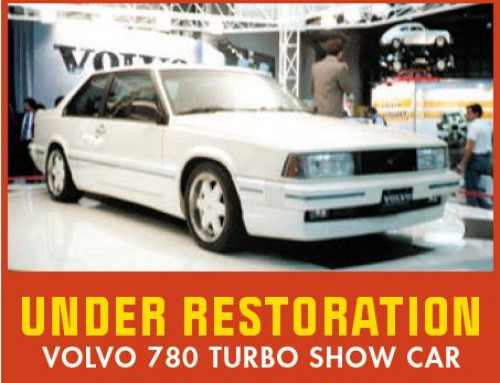